I was really really shocked when my Palestinian friend told me about this dish!!! I kept asking are you sure then she replied yes no doubt about that… that’s how we traditionally make it.
This recipe calls for a one large diced onion and a half cup of olive oil for each piece of taboon bread you are using. So, if you are having company and made like 12 bread pieces you will need 12 diced onions and 6 cups of olive oil.
Turned out that this huge amount of olive oil needed to make the bread crispy and flavorful. And the onions? seriously what sets this dish apart. The caramelized onions sauce is seriously delicious, you wouldn’t appreciate it until you try it. I even eat this sauce with rice, bread or by the spoonful.
But, I’ve decided to tweak it a little and made it with less, still it turned out delicious so it is your choice to make it as is or to reduce the amounts like I did. This is a very traditional Palestinian dish known for its delicious taste due to the use of olive oil, nuts and sumac.

I cooked the chicken the traditional way by boiling. You’ll need to use bone in chicken, whatever you have. I’ve seen some making it with wings which was a nice twist. We’ll also need a couple of tablespoons of olive oil and some authentic spices for cooking the chicken.

For an authentic recipe, make your own Musakhan bread. You can also make pita or if you do not have time buy some Greek or naan bread. We’ll also need onions, lots of onions actually. I’ve used 5 onions. Then the spices that will make all the difference. Traditionally I’ve seen this Palestinian sumac chicken served with almonds. But you are welcome to use whatever you like or have in your pantry.

Now we are finished with the dish so let’s assemble it. Put the bread on top of each other and arrange the chicken pieces around. Or serve individually with each bread piece topped with chicken and any leftover onion sauce on the side. Enjoy with a side of tabouli, hummus, tahini sauce or baba ganoush. 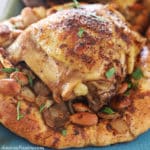 I think this is the most unique recipe I’ve seen in a very long while. I think it must taste fantastic, it would be hard to choose your version or go for the one with all of the onion and olive oil. It was a pleasure to visit you here! xx

Thanks Barb nice to see you here too :).

What an interesting dish. I love everything about it except all the oil. I even like all those glorious onions. 🙂

Unfortunately, more onions means more olive oil so you can tenderize them well 🙂 . Thanks Maureen for stopping by.

Amira, musakhan is a family favorite. This looks great.

Thanks Noram, Good that you know Musakhan but do you go for the whole version with all the oil?

This sounds delish! Although I’m definitely using your version rather than the traditional — all that oil! I’ll bet it’s good, but wow. Really nice recipe, and new to me. Thanks.

If you decided to go for the traditional then make this recipe only once a year 🙂 thanks John.

This bread seems to be quite tasty — full of spices and topped with chicken! Mmmmm!!!!

Yes it is really delicious. Thanks Denise.