Sumac is one of the underestimated spices in the world. I know people who does not know what to do with it, for me I hardly knew it. Sumac has many health benefits and researches recently claims that sumac have antimicrobial properties, may be used to treat and prevent hyperglycemia, diabetes and obesity and also have antioxidant properties. Keeping that in mind and hoping for a healthier life for all I’ve decided to include more and more of sumac in my cooking. Here are two of the easiest appetizers that I’ve learned from a Palestinian friend. 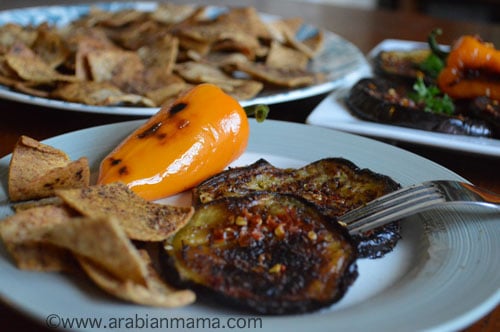 In this recipe I’ve tried for the first time in my life not to peel the eggplants also I’ve tried not to deep fry it and followed Charles advice – fellow blogger from Five Euro food – and was I surprise!! Oh boy there was not bitterness and it turned out great. I always believed that it should be peeled and deep fried, thanks Charles for convincing me ;->

Here is what you will do: 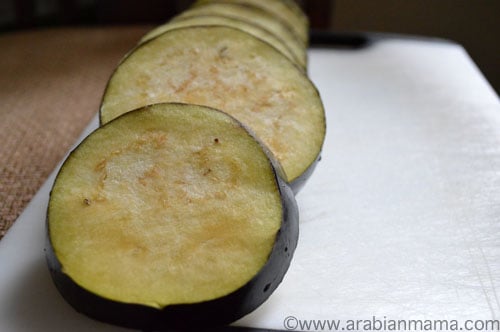 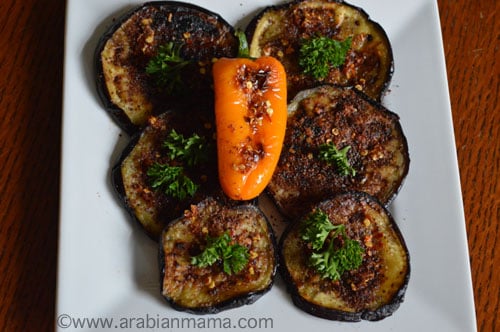 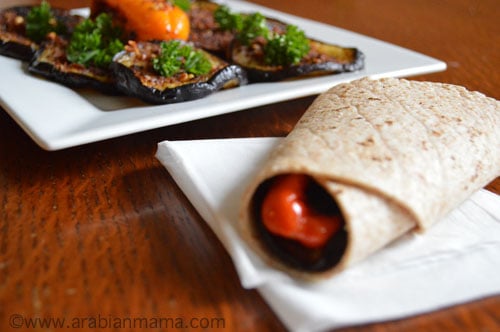 Now for the second one: Roasted bread with olive oil and sumac

Mix the bread pieces with the EVOO trying to cover all the pieces evenly, put in a single layer on a baking sheet and bake in a 400F pre heated oven until the pieces are golden and crispy. 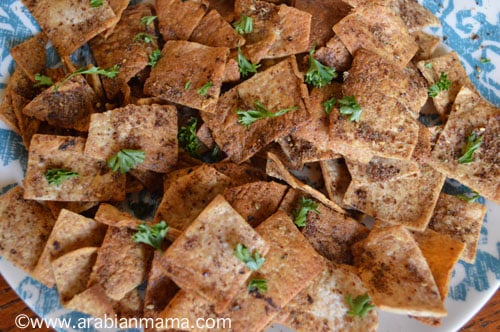 Sprinkle with the spice mixture as soon as they get out of the oven and mix well. 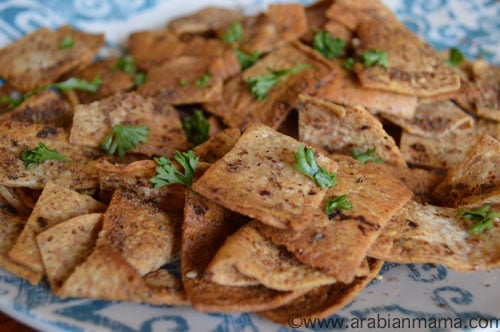 Let it cool down garnish with some parsley or cilantro would be yummy. 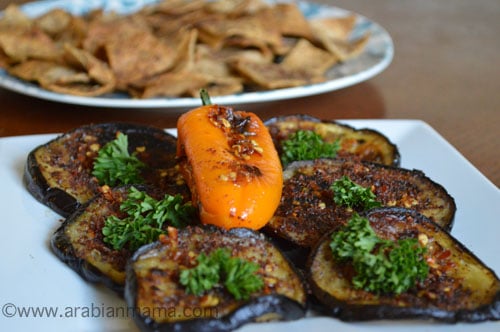 This duet is so awesome specially in gatherings, too easy to make too yummy to resist.

I love cooking with sumac, so am grateful for these recipes. But the eggplant one doesn’t list sumac as one of the ingredients! Did you leave it out?

Two beautiful dishes! I have no idea what sumac tastes like, but I’d definitely try your lovely appetizers!

Thanks Liz, actually sumac is a spice that has a tart taste and you can use it to substitute lemon juice in different recipes. Try to find it in your local international market I am pretty sure you will like it.

No problem my friend… Did you know Samira is also an Arabian name!! 🙂 Thanks for the visit

Samira: I am a big fan of eggplant…Yours looks beyond delicious. I wish I could dig my fork in your plate.

Haha, excellent! I’m so glad you could give it a try! You know, I did have aubergine once which had a REALLY bitter skin, but I think it’s rare – maybe it’s just a certain variety, so I’m glad you could enjoy this with the skin. I love the skin – it’s my favourite part actually hehe.

Sumac is a new one to me – I have some at home but never really tried it on aubergine before, or even in cooking in general. Will give it a go – thanks for the mention my friend! 🙂

I’ve heard my mom once say if it has big seeds inside and not smooth and small ones then it is a bitter one for sure ..I really really love the idea of just brushing them and then putting them on a hot pan .. it gave the same taste as deep frying it but healthier, I am going to teach this to my mom and sisters when I visit them this summer. Thanks a zillion Charles for lowering our Cholesterol level 🙂