Get your shawarma fix with this festive looking delicious shawarma pie. Your eyes along with your tastebuds will definitely thank you for this.

We love chicken shawarma around my home, it is always on my menu. But, we get bored, human nature. If you get bored from preparing it the traditional way, try this chicken shawarma recipe that will knock your socks off!!

When I was in Egypt this summer, my niece took me to a Syrian restaurant that makes- in her opinion- the most delicious shawarma wrap in the whole world. It was ok, I have to admit that their toomeya was super delish but the chicken itself... was lacking in various aspects. If I was to describe it, I would say a nicely well marinated GRILLED chicken, but nothing more.

I do not know what happened to the shawarma restaurants lately!! this is not what I grew up  devouring as shawarma. Sometimes they put fried potato cubes in the wrap!! what is this. For me, shawarma was, should and will always be tangy and garlicky as well.
Chicken for shawarma should be marinated in a mixture of lemon and white vinegar to give it the taste I remember from my distant childhood :).

Many recipes call for only lemon juice, and often times it does not give this authentic tartness not even close. If you hate tartness in your food then this recipe is not for you and just wait for my next recipe, I am sure you'll be pleased as I am preparing a surprise.

So enough talking and let me show off a little :).

Meanwhile, mix the dough ingredients and let it rise for almost an hour or until doubled in size.

While the dough is rising cook the chicken either on stovetop or in the oven. I like cooking shawarma on the stove as it gets crispier with brown edges.

Now divide the dough into two unequal parts to form top and bottom of the pie.

Roll the bottom (bigger) part and top with cooked sharama along with the veggies.

Roll the top part, brush the edges of the bottom part with water then cover with the top part and seal with a fork.

Brush the top with an egg and sprinkle some sesame seeds on top. Bake in a 400F preheated oven for almost 20 minutes until top is golden brown. Bake for more time if you want a harder crust.

I did not cook the veggies with the chicken as I wanted the veggies to be crisp but of course you can cook them along with the chicken either in the oven or on stovetop.I've made this dish several times, it is a crowd pleaser so feel free to double or triple the recipe if you feel the need to for larger crowd. 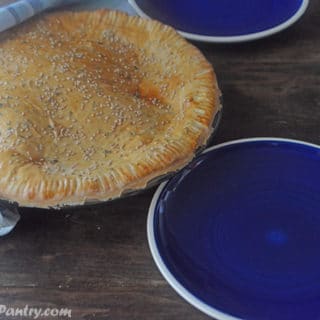 For the chicken shawarma: