Addicting sweet phyllo rolls that are famous of being Lebanese are sold in every pastry shop in the Middle East. Znoud el sit are usually fried but this time I baked them in the oven for a healthier version.

What you will need:

Lebanese Ashta, is a creamy filling for many Lebanese desserts from knefah, Qatayef to these little phyllo dough fingers. It is thick, creamy and not sweetened as it is usually then stuffed inside one of those desserts and dunked or drizzled with simple syrup, so I assure you we have enough sugar in there.

Ashta is made in so many ways, almost every Lebanese lady I've met has her own way, but I've got this recipe from a master in Lebanese desserts and it works fine with me up until now. The trick as my friend said, is to put pieces of toast- without the crust- or the inside of buns in the mixture to make it nice and thick.

My son, the middle one, got some issues regarding his teeth, and when his dentist saw him more than ea year ago she put a metal crown over a baby tooth, that was suffering greatly. He was so thrilled to get this shiny little thing in his mouth!!!. He said I feel as if I am a wealthy rich guy with this shiny tooth, next morning he went to school so excited to show it to all his friends, he felt so cool and proud😎. It is amazing how kids think of some stuff, if I had this tooth in my mouth I would have tried to take it out myself.

10 days ago he felt that it is loose, and I thought the crown itself is loose. We went to the dentist and before she could touch it, the tooth flew right out of his little mouth with the crown on top of it. It was a moment of grief for him, he is no longer the rich wealthy kid and it took part of his character with it. He felt he is no longer cool😕. We spent the 45 minutes back home discussing the matter and reinforcing self esteem, and how we should be pretty from inside and not just outside... etc.
When we were back from the dentist, I wanted to treat him, and I knew he could not chew on something hard so I've made this goulash or phyllo dough, stuffed with the ashta and did not make it crispy or crunchy all over just a little from the upper side, and he loooooved it and almost ate half of it alone, then totally and magically stopped whining over the shiny metal tooth and I hope this is for good.

If you would prefer these fingers to be crunchy all over, then space them in the oven dish and turn them half way through the baking time to make sure it is crunchy and golden brown all over. These fingers are so easy to make and even easier to eat, drizzle with simple syrup(traditional) or honey ( healthier), it is your call. I've garnished it with some ground pistachios but this is totally optional. 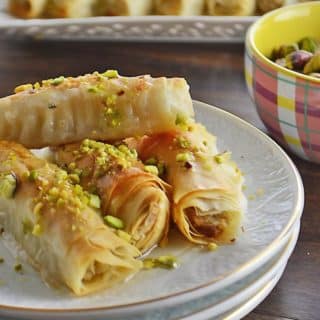 Freezing instructions: Freeze stuffed fingers before baking separated on a baking sheet lined with parchment paper for 3 hours until firm then transfer to a plastic bag. No need to thaw before baking just give them extra time in the oven. Please check the nutrition disclaimer policy. Vitamins are in percentage value. Percent Daily Values are based on a 2,000 calorie diet. Your daily values may be higher or lower depending on your calorie needs.