A delicious cross between pizza and pie that is very flaky without using butter.
Jump to Recipe Print Recipe

Looks like pizza, but it is not a pizza. Looks like a pie, but this is not your ordinary pie. This dish is a combination of both with so very new toppings. Flaky that you will not believe it does not have butter!!!

Merayesha is a term coming from the word "reesh" which means feathers in Arabic. Why calling this dish that weird name well simply because you are supposed to finely slice cooked chicken meat into very long think strips that looks like feathers.

This dish was so new to me, when we were first introduced I fell in love from the first sight :). My Libyan friend told me that this is a very old recipe that many Libyans haven't heard about it before!!!. I have the feeling that the cream cheese coat was not there in the old time and it was maybe introduced later… or may be it was some sort of goat cheese layer back then, as cream cheese is not as popular in the region specially in the old days.

Somehow the sesame seeds adds a new dimension to this dish and gives it more authenticity. I really liked every bite of this merayesha. I highly recommend making this dish as is at first and then if you want , play with the ingredients as you like to adapt. But I'm sure most people will - at least- like the idea.
This recipe called for chicken meat that should be smoked, I've used a special and easy trick to smoke my canned chicken breast, but of course you are welcome to use any smoking technique you like.

A final note: I have been bombarded on youtube by comments saying this is not a Libyan recipe, I have no idea if this was true or not but I am just relaying a message from my friend saying " If you do not know this recipe it does not mean it is not". And I tell you Libyan or not this is a very good recipe to enjoy. 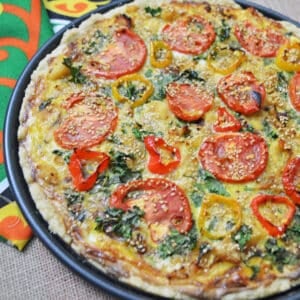