This is the most famous phyllo dough recipe you can ever find in the Middle East, it is always there as a side dish in almost each and every occasion.
You know well by now that I grew up in the phyllo zone of this world and this is why I so much love creating recipes with phyllo dough. Phyllo appetizers and desserts are on my top list of addicting food.
Working with phyllo seems to be second to nature for me but I know some of you finding it daunting and I am telling you don’t. It is really easy and I am going to share some tips and tricks with you hoping that I will convince you.
My kids love it so much, I would be very satisfied if they took a couple of those squares along with some green salad and call it a complete meal.
Sometimes I add veggies along with the ground beef, celery, peas, small diced beans, spinach …etc, just do not spread the news and they will  eat these delicious squares and ask for more.

Almost 2 weeks ago, we took the kids to a concert organized by the Islamic Relief USA to help children around the world. My kids went there to see one of their favorite singers Raef. Raef is a singer who sings what i call “clean music” , I can totally leave my kids watching his videos without any worries of what they will see or hear. They were very thrilled to see him, specially my 5 year old.
He kept on asking about him for the whole concert as his part came last, and just when he was about to fall asleep, Raef showed up and you can never imagine the smile on his little face and the excitement that he felt.
There was this special song that my kid loved as we sing it almost everyday going to school in the morning, dream, so to my surprise, my little one found the courage to go up on the stage and ask him for that specific song. Unfortunately, the song was not on his schedule and he was really running late, so Raef was unable to sing it for him on stage, but he promised him to sing it after the concert … and frankly I thought this will never happen and he will get caught up with all his fans.

But, he really did leave his fans, got his guitar and fulfilled this 5 years old fan’s wish. He actually sang the song specially for my boy . My kid was so embarrassed that he could not sing along not even a single word, but really, imagine this little guy standing next to his beloved singer and with all these camera flashes, people looking at him and cheering for them both, poor thing his little heart must have raced as if he was running a marathon hahaha.
A BIG thank you to Raef, who did not turn his back to his little fan, now we wake up and sleep on his songs :). We really did enjoy the concert with all its parts specially Omar Regan who cracked us up with his hilarious jokes.
It was a fun night for the whole family with a noble cause. The only problem I have right now is that my home is, suddenly, filled with singers and they all want to take guitar lessons :/. 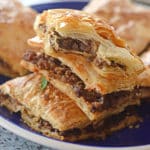 Note1: If you want you can cook any desired vegetables with the meat for added benefits such as, celery, peas, corn, small cur green beans…. etc.  Note2: I’m used to using 1 cup of fat ( usually butter) when making this recipe. For some health issues lately I’ve starting using light tasting olive oil with a little ghee for the flavor. Here you’ll notice I’ve used 3/4 cup of fat but I’ve a feeling that I can make this with 1/3 cup of oil and 2 tablespoons ghee. I will try this next time and let you know. Please check the nutrition disclaimer policy.

I have had a very similar dish at an Egyptian restaurant in Wichita, KS. So happy to have found this recipe, but what size pan do you use for this recipe?

Hi Melissa, thank you for being interested in this recipe, I hope you’ll find more recipes that will appeal to your taste in the blog. For this recipe it depends on the size of the phyllo you get, but I always use any 13″x9″ for the phyllo I get from Walmart or use a this nordic pan (affiliate link) for the phyllo I get from the International market as it is bigger. Thanks again and please come back and tell me how it went .

I have to admit that I got teary reading the story about Raef getting his guitar and singing for your little boy. That’s something he’ll never forget and it took just a few minutes out of his life. I’m so impressed.

I would love your phyllo pie!

What a happy shot of your boys with Raef. He looks like a great guy. Your pie looks really yummy. This would definitely be a complete meal for me. 🙂

Wow…this looks scrumptious. I could grab that right off the screen 😀

That is such a cool story about your boys meeting a fave singer and him being to nice! And I remember your other goulash, I cannot be tricked lol. Looks really great!