Fried choux pastry, crunchy and sweet, yet so soft and airy from the inside. Balah el Sham is one of the very popular and very irresistible desserts.

What exactly is Balah el Sham? Literally translated from Arabic it means Levant dates. No this dessert does not have dates in it, it was named dates as of the size and Levant as it originated from the Levant area in the Arab world.
Balah el Sham is typically a fluffy choux pastry, fried then dunked in the heavy syrup. It is so sweet, but you can just drizzle it with some honey for a lighter variation. You also can stuff it with custard, whipping cream or mascarpone cheese and drizzle with some honey and finally sprinkle some pistachios on top..... so delicious.

Making Balah el sham has been on my bucket list for a long time. I do not know from where I got the idea that it was too complex to make!!. Making a choux pastry seemed daunting for me but finally I grabbed my tools and started working ... was it successful? . Actually it was one of the best desserts I've ever made.

Mixing the eggs into the batter is the only hard or confusing step in this recipe. When you first mix in the eggs it gets messy and it seems like everything you failed!!! if it did so then no worries you are on the right track just keep mixing and it will come together eventually forming a very nice and soft dough. After mixing in all the eggs, a sign of success is that when you pull a spoon out of the dough it forms a hook, if not then add another egg.

Balah el shaam is traditionally dunked in heavy syrup, but you can sprinkle with powdered sugar or drizzle with honey. Lately we have seen Balah el Shaam stuffed with whipping cream or Ashta, drizzled with honey or syrup and sprinkled with pistachios .. yuuummmm

Here is a video showing you how to make Balah el Sham. Enjoy the rest of the week. 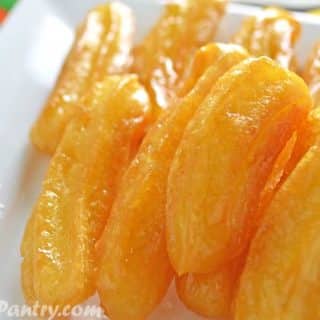 Note1: You can pipe and dough into a baking sheet lined with parchment paper and freeze separately. When they are fully frozen place in bag, can be frozen up to 2 months.
Tried this Recipe? Pin it for Later!Mention @AmirasPantry or tag #AmirasPantry!