Om Ali or Ali’s mom this is our recipe today. Another recipe with a strange name …. I can hear you say that :). Actually I agree with you it really has a strange name and a bloody legendary story.
In short, it is said that this dessert was made to celebrate the death of Shagaret Ad-dorr- who was the first and last woman – sultana – to rule Egypt. She was a victim of a plot made by Omm Ali – her husband’s first wife- along with her maids as she was beaten to death and the rest of the story is even more barbaric. So the bloody Omm Ali made this dish to celebrate Shagaret Ad-dorr death. There are several of other less violent stories around this dish but this is the most common in Egypt. When I make this dish I try not to overthink this story🤐.

Omm Ali is a sort of bread pudding. It can be made using phyllo dough, puff pastry or croissants. In most Egyptian pastry shops you can buy special Om Ali’s dough to start with. I’ve made it today with puff pastry and find it quite successful. Om Ali is more of a winter dessert as it gives lots of energy to warm up with. 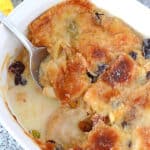 This recipe was a hit! My husband actually asked me to make it because it was the one dessert that we didn’t have while we were there last. He had two bowls! I made a couple of adjustments, but it was perfect! I’m planning to make it for our annual Egyptian iftar cookout. I doubled the recipe and used evaporated milk (because I needed my regular milk for something else) which made it very rich and almost caramel-like, and I added coconut, pistachios, and almonds for my nut mixture. I used a tub of Cool Whip on top, and it… Read more »

Lashauna, thank you so much for your feedback. I am happy that your hubby liked it. I made it a couple of nights before for iftar as well, my kiddos devoured it.