Homemade pita bread is the best, soft, pillowy and easy to make. Use this bread for your falafel, ful medammes, kofta or maybe to scoop up a delicious okra stew. It is so soft, so hollow with a large pocket that is open for anything you wish to stuff it with.

Check out our version of whole wheat pita bread here.

I grew up with pita bread everywhere and in every possible form and name you can ever imagine. Bread is a kitchen staple in the Middle East, in fact the word " bread" is always used to express living. During the Arab Spring, protestors were shouting " bread, freedom and social justice" and bread here meant finding a decent way of living and earning money.

Talking about revolutions and freedom, I was studying American history with my saucier, the years and incidents that led to the declaration of independence. There was this question that said " who do you think is a good citizen, one who follows the law or one who stands in the face of injustice? My kid blurted out that it is the one who obeys the rules and follow law!!. We had a really long conversation and I told him if it was that then you do not approve of what the founding fathers have done. They have disobeyed the British rules and protested against unfair taxes so they can get freedom for the people. And a long long talk about how we should stand against any unfair laws bla bla bla then at the end he just looked at me saying " mama, still the good citizen is the one who follows the laws"!!

I love homemade breads, to tell you the truth I was not a fan of baking anything but when I came here I discovered my love for baking. There is something satisfactory about baking specially bread. Kneading, seeing it rise, shaping and waiting anxiously by the oven are soul healing processes for me and I believe many others.
Fresh pitas are among things that are 1000% better homemade than store bought. Making pita bread is not hard at all, the only common problem is how to get them to puff. I have made many recipes before and this is the least fussy and easiest to throw together. Don't give up, bread making is all about making mistakes and getting to know your ingredients better. If baking is your thing, I highly encourage you to try this recipe. It is a wonderful intro recipe for those looking to incorporate more homemade bread into their meals.

What is Pita Bread?

Pita bread, also known as Arabic bread, is a family of leavened round bread. Its main characteristic is having a pocket to stuff things into. There is also a pocketless versions such as Greek bread.

Naan has a softer texture than pita bread as it usually contains dairy products. Naan bread has yogurt, milk ,butter/ghee or eggs. This pita bread version on the other side is dairy free.

Flatbread is considered the big umbrella under which pita bread can be classified. Flatbread usually does not contain Leavening agents such as in this unleavened bread recipe.

How pita bread is made?

This pita bread recipe is so easy to make and requires only 5 ingredients, 3 of them are kitchen staple. Make these as thin or as thick as you like, bake them in the oven or stove top whatever is more convenient for you. First let's see what are pita bread ingredients.

Notes for the perfect pita bread every time:

I've noticed that my kids liked the stove top bread more than the oven so I made most of the batches on the stove top. I've made some in the oven and I left them to brown a bit. This reminded me of a certain crispy pitas in Egypt and I usually enjoy it with feta cheese and watermelon.
Finally if yours did not puff, which I highly doubt, do not stress over it. Try cutting it in half and carefully separate the bread with a pairing knife. You’ll still have a most delicious homemade bread and with a little extra effort, the most delicious baba ganoush, tahini or hummus to dip it into.

Ultra pillowy, soft pita bread recipe that will fill your home with fresh homemade bread smell. This is a great, basic and fairly easy pita bread recipe for beginners.
If you like this recipe do not forget to give it a ⭐⭐⭐⭐⭐ star rating and attach a photo of your finished dish. It is always a pleasure of mine to see your photos and check your own take of the recipe. Thank you. 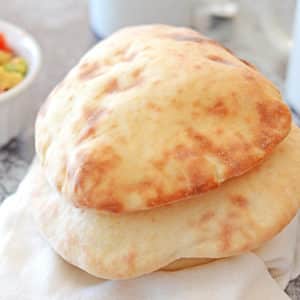 The dough for this recipe requires only flour and yeast, the rest of the ingredients are there in your pantry. Only 30 minutes of rising time and there is no going back to store-bought pita even again.
4.91 from 10 votes
Print Pin Rate
Prevent your screen from going dark
Course: bread
Cuisine: Greek, Mediterranean, Middle Eastern
Prep Time: 10 minutes
Cook Time: 12 minutes
Rising time: 30 minutes
Total Time: 52 minutes
Servings: 4 Pieces
Calories: 250kcal
Author: Amira

Time to show you off!